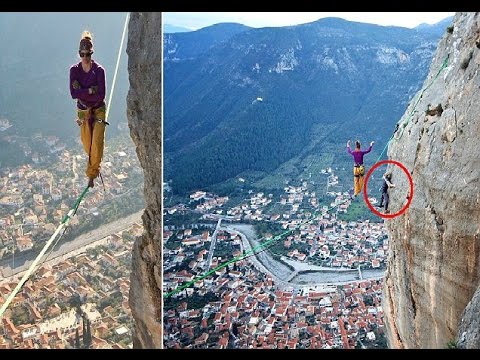 
From daredevil people ice climbing up incredible heights to the oldest woman to paraglide ever here are the most extreme sports!

6. Street Luging
Southern California was home to the first street lugers when skaters discovered that they could attain greater speeds by lying face down on their boards. The first professional race took place in 1975, and the winner of the contest was the person that gained the highest top speed. Like many other extreme sports, street luge saw a spike in popularity at the turn of the century thanks to enhanced media coverage towards extreme sports in general. The risks and dangers are obvious in an activity that involves going downhill at speeds of 60 mph or more while lying on your back inches from the ground on a strip of wood with wheels. Modern professional lugers wear safety equipment whenever they attempt a ride.

5. Bungee Jumping
The roots of this vertigo-inducing sport can be traced back to April 1, 1979. That is the day that two members of the Oxford University Dangerous Sports Club made the first bungee jump from the Clifton Suspension Bridge in Bristol, Connecticut. The pair were arrested following the stunt, but they continued making leaps across the country. One of these jumps was sponsored and televised, which greatly increased the awareness and popularity of the sport. This activity comes with a tremendous amount of risk, and many people have died due to equipment mishap. Many serious upper body and head injuries like whiplash often occur as a result of the cord recoil that occurs during bungee jumps.

4. Slacklining
Slacklining involves walking across a flat webbing tensioned between two anchors. One of the great things about this sport is almost anyone can try it practically anywhere. Slacklining becomes an extreme sport when you master it and have the confidence to take your ability to very literal new heights. Most expert slackliners attempt to walk across their line from very high places, either between two tall buildings or two high points in nature. Slackliner Laetitia Gonnon recently completed an epic 280-foot walk over the beautiful town of Leonidio, Greece. During the walk Gonnon almost fell several times but luckily she made it across safely. Two high line walkers recently set the record for the longest highline walk ever when they walked 3,346.5 feet in Aiglun, France.

3. Wingsuit Flying
Wingsuits first came out in the late 1990’s and with it, a new extreme sport was born. It involves gliding through the air using a wingsuit, which creates a fabric surface area between the legs and arms, giving the athlete a huge lift increase and the ability to fly through the air. Typically the flight ends with a parachute, but there have been dives made minus the parachute. Stuntman Gary Connery became the first person to land a wingsuit flight without the use of a parachute in 2012 when he jumped out of a helicopter from 2,400 feet up and landed on a strip of roughly 18,500 cardboard boxes.

2. Cave Diving
There are not many people out there who have the equipment or the bravery to go cave diving. It involves visiting and exploring water filled caves. There are a ton of risks that come with this sport, and specialized equipment is needed if you are even thinking about attempting a descent. One of the main risks is hypercapnia, or carbon dioxide poisoning, which can cause disorientation and lead to death. Because of this cave divers need a rebreather, which is a device that artificially absorbs carbon dioxide, to go cave diving. Unfortunately, there has been a significant increase in the number of fatalities due to cave diving since 2010.

1. BASE Jumping
The word BASE in base jumping is an acronym for the four categories of objects from which a person would base jump. B is for building, A is for an antenna, S is for span and E is for the Earth. The sport consists of finding a suitable spot and, with the use of a parachute or wingsuit, jumping off of that spot. This activity is much more dangerous than skydiving from a plane because of the lower altitudes from which base jumpers leap. An unofficial list tallied a total of 254 people passing away from BASE jumping between 1981 and 2015, but there are believed to be plenty more unaccounted for fatalities from this high risk, high reward sport.