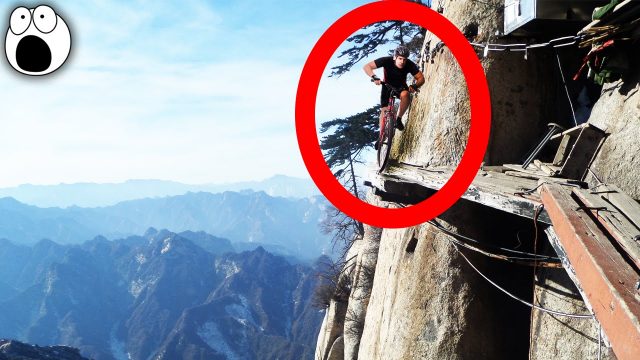 The Most DANGEROUS places for EXTREME SPORTS


For some people, everyday sports just don’t cut it. They would rather dive into an abyss, literally. If flirting with danger excites you then how about visiting some of these pant-soakingly scary places for extreme activities.

SPOILER ALERT!!!
We suggest that you watch the video for a more informative and entertaining experience, but a list of the 10 is below:

You’ve probably been hiking and recognise that it’s a pretty tame activity. But, that’s because you weren’t hiking on a rickety system of boards suspended over 900 meters into the clouds. Mount Huashan in China’s Shaanxi province features a 2ft wide plankwalk trail system which circles the mountain and terminates at a Teahouse. Despite there being plenty of safe elevations to conquer, some choose the perilous cliffs of Moher in Ireland as their chosen joy-ride. The fearless can cycle on narrow ledges next to a sheer drop of over 180 meters to rocky tidal pools below. However, if you do fancy hurling yourself off cliffs at height then you should try extreme kayaking. The risk of impalement, drowning or blunt force trauma clearly aren’t scary enough for world record holders such as Tyler Bradt. He managed to plunge over 60 meters down the palouse falls in one incredible feat and he isn’t the only one to have kayaked over waterfalls. On the other hand, climbing up a waterfall can be just as extreme. Armed with ice picks, extreme climbers can scale up the 182 meters of frozen rocky mountain waterfalls in Canada. And even though rocks are less likely to collapse, climbing them can be just as dangerous. Climbers have been particularly excited by the Yosemite national park which contains some of the world’s most famous rock formations in the world. One of the most famous formations, the ‘El Capitan’, can be climbed many ways including the dawn wall and prophet routes which are apparently some of the most difficult climbs in the world. Caving can be just as extreme due to complex labyrinth-like caverns which can disorientate and trap thrill seekers who may even fall to their death. One especially insane cave is the Giant Crystal cave in Mexico. Sitting on fault lines, it is super hot, and cavers would only survive about 10 minutes in it unprotected. You can explore the world’s deepest cave: the krubera cave, which is just as amazing as it is dangerous. You can even take it one step further by going underwater. Cave diving through tight gaps in pitch black caves and tunnels hundreds of meters below the surface is extremely dangerous and underwater relics of the dead and warning signs confirm this. Even so, you don’t have to be below the water to be in danger. Bizarrely, Some people have adapted the rather mundane sport of paddle boarding into an extremely terrifying activity. How, you may ask? Well, Mix in a circling great white shark and you can assume the role of a sitting duck. Maybe Jackass will try this one off the South African Cape. Well, to be fair, most of these activities would suit jackass.

Music Credit:
Harmful or Fatal by Kevin Macleod, ‘Monitors’ by Silent Partner & ‘But Enough About Me’ by Bill Paxton.