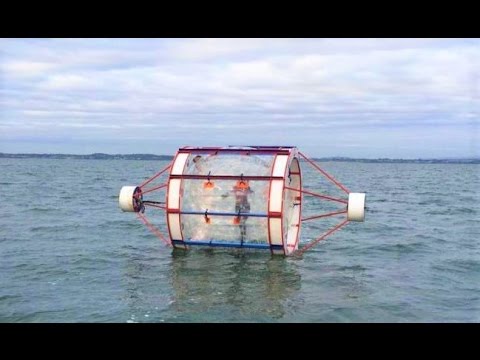 
From Wakeboarding to Windsurfing here are 10 Most Extreme Water Sports.

5 – Wakeboarding
This surface extreme water sport involves the practice of riding a wakeboard over the surface of water. The wakeboard and is a thin board with shoe attachments and employs a combination of water skiing, snowboarding and surfing techniques. A motorboat will pull the wakeboarder at speeds which usually run 18 to 25 miles per hour, or 30 to 40 kilometres per hour, sometimes the rider is pulled by a jet ski or closed-course cable system. Wakeboarding has been recognised by the International Olympic Committee as part of the World Games since 2005.

4 – Windsurfing
Another surface watersport which combines elements of sailing and surfing, the surfboard is connected to a sail which powers the movement and causes the surfer to move at speeds of 2.5 meters per hour to 12 meters per hour dependant on the conditions of wind and sea as well as the talent of the surfer. Modern day windsurfing sails are made of mono film which is a clear polyester film, dacron which is woven polyester and mylar which is a super-compressed form of polyester and stitched together with kevlar thread, which is the stuff body armour is made from to withstand bullets. In other words, the sails are super strong yet flexible. World Indoor Windsurfing Championships are held during the annual London Boat Show in London during January, the competitions include slalom style racing, jumping competitions and many more events in this high-pressure art of extreme watersport.

3 – Kitesurfing
Another surface water sport which combines the aspects of wakeboarding, windsurfing, paragliding, and gymnastics into one ultra extreme water sport. A power kite is attached to the surfboard, most commonly the kitesurfer will be attached to the board with foot straps and then pulled by the wind which will cause the surfer to lift up into the air, still attached to the kite will allow the surfer to twist and pull and adjust the board to create intricate patterns in the air, similar to skateboard or snowboard moves. In 1999 kitesurfing broke into the mainstream with manufacturers Naish and Neil Pryde creating the dominant designs, by 2012 a racing style course for kiteboarding was announced as an official sport and was announced as so in the 2016 Rio Olympics and again as an event outright in the 2018 Summer Youth Olympics. Louis Tapper currently holds the record for the longest recorded kit journey completing an astounding 2000 kilometres in 2010, his record took over 24 days of surfing.

2 – Scuba Diving
This next extreme sport of the watery world is a version of underwater diving in which the diver uses a self-contained underwater breathing apparatus, better known as SCUBA, to breathe underwater and swim beneath the surface. The scuba gear provides mobility underwater as well as horizontal ranges and are used primarily in recreational usage. However, some professional applications may be applied as well, such as scientific forms of study, military combat divers or attack swimmers which in the armed forces are referred to as frogmen and commercial diving. Treasure hunting seems to be a popular form of this water sport. Cave diving, wreck diving and ice diving are some forms of treasure cove seekers. Frogmen practice search and recovery as well as search and rescue and even direct combat such as bomb disposal or engineering options. Scuba Diving International and Professional Association of Diving Instructors have Underwater Explorers on hand to handle such possibilities. This water sport is listed as extreme due to occasional injuries or even deaths occurring with this professional form of deep sea diving, mostly from marine animals in hazardous underwater environments.

1 – Whitewater Rafting
This extreme watersport is mostly done for recreational purposes, for the thrill-seeking heart beating inside hungry enthusiasts. This sport is comprised of an inflatable raft used to navigate a river or hostile body of water. This sport is composed of an International Scale of River Difficulty, they range from simple steam jetting to very dangerous white waters to potentially fatal conditions. Class 1, for example, would be a gentle river or stream wherein you guide the raft through gentle waters turning to avoid the occasional big rock. To a Class 6 where rapids force the raft through huge waves, humongous rocks, death-defying hazards and sometimes substantial drops like small waterfalls. Often this sport is comprised of teams with everyone inside paddling as one to make the inflatable craft twist and turn, this sport is considered extreme as injuries which sustained are usually severe and can be fatal.